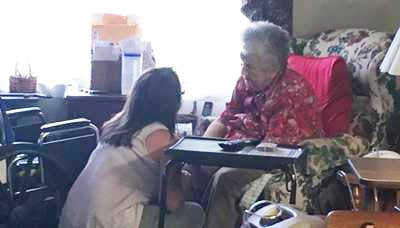 Oda grew up in Mt. Hope, so when it was time to move to a nursing facility in 2013, she knew where she wanted to go. Being from the area, she remembered when Mt. Hope Nursing Center was built, and when each addition was built. Now, Oda has been at Mount Hope Nursing Center for four years, and she is happy to have remained close to where she grew up and to her family, who visit frequently.

“I like the place real well,” Oda Said. “It’s a really good place to live, and we’re very lucky to have a place like this in our town.”

Oda was born in Rice County, Kansas, and attended school in Bentley. At the age of 10, she moved with her family to a 400-acre cattle farm two miles north and four miles east of Mount Hope, Kansas. She and her five brothers each had jobs to do on the farm, and they grew up to be hard-working and ambitious individuals. Oda would later marry another local farmer, furthering her ties to Kansas farmland. Today, Oda’s room at Mt. Hope has a window that faces a farm, reminding her of her childhood.

“I love my room because I can look out and see farmland and see them plant crops. It’s what I’m used to,” she said.

Once Oda had married, she devoted her time and energy to taking care of her family. Together, she and her husband had a son and a daughter, who also helped on the farm. Her husband passed away young, at the age of 47, but her children both live nearby. Her son, now retired, lives just six miles from Mount Hope Nursing center, and her daughter lives in town and works at the dental office.

“I’m very lucky that my family is close and that we don’t have to travel far [to see each other],” Oda said.

Oda, who sometimes has trouble remembering names, enjoys Mt. Hope’s small staff, with whom she can develop close relationships.

“I think a bigger facility would have a lot more changes than a small, hometown place like this,” she said.

In the four years Oda has spent at Mt. Hope Nursing Center, she has been continually impressed with the care she receives and the staff members that she gets to interact with every day.

“The nurses are kind and they get to you quick,” she said. “They are really focused on the people, and it’s more home-like that bigger places.”

“Gina really has a heart for what she does. She is very kind,” Oda said.